The Suits are the antagonists of Five Nights At Treasure Island. They resemble Disney characters and must be repelled by shutting off a cam, by hiding under the table, or by shutting off the power.

Photo-Negative Mickey is the main antagonist of the game. He is a Mickey suit, but colored in photo-negative. He wanders in a straight pattern from Character Prep 1, through Staff Area, to the Meat Freezer. From Meat Freezer he can enter Office through the right door, or go to Bathroom, Lounge, and then go to the left door of the Office. Once in the office, shutting off the cam should lure him away.

Dark Oswald is an unfinished suit.

Disembodied is the head of a Donald Duck suit. His eyes are black and he lacks his sailor hat. He starts in Character Prep 1, and first will stare into the camera when he's ready to attack. He will then appear on the player's desk in the Office, making glitched loud quack sounds. The player must shut off a cam to make him leave. Otherwise he will speed up the movement of other suits.

Mortimer Mouse is a grayscale Mickey costume that is the direct reference to the creepy pasta MortimerMouse.avi. He will start from the Broadcasting Room and will go through Character Prep 1, Staff Area, Meat Freezer and Office. He goes in a straight pattern. He will also change posters in Character Prep 1 to his face. Shutting off the camera makes him go away.

The Face is a Mickey suit, but unlike Photo-Negative Mickey, he retains his normal colors. His legs are missing, his jaw hangs open as if broken. His eyes are human eyes, and are smaller than his sockets. He will randomly appear at the player's desk, and the player will need to shut off the cam to make him leave. He makes banging sounds when moving.

He also appears in Pirate Caverns chasing the player.

Acephalous is a Goofy suit that lacks a head. His head can be found in the Meat Freezer. Acephalous will start in the Bathroom, and move to the Meat Freezer until he reaches the Office. In the office, the player must hide or shut off the power to make him go away, otherwise he'll kill you.

His head can only teleport if his eyes are open.

She's the photo-negative version of minnie. She has small, empty eyes and a big row of human-like teeth. She appears in Character Prep 1 and will move in a pattern similar to Photo-Negative Mickey. Once in the office, you must shut off the camera or the power otherwise she'll kill you.

MickMick begins in the Storage Room then moves to the Staff Area, then to the Meat Freezer, can move to the Bathroom, then to the Lounge, and to the Office. If you don't shut off a cam or the power, you'll be killed by him.

He is a gloomy looking version of Pluto. Pluto is one of the easter eggs, and will rarely appear on the left door of the office, making bark-like sounds. Shutting off a cam will make him go away.

Ortensia is a cat with white skin, a purple sarafan and a pink hat with a daisy on her head. Like Oswald, she has no arms. Ortensia starts in the Storage Room and can move to the Staff Area, Meat Freezer, Lounge and The Office.

He appears to be a little green crawling humanoid but its head looks like a suit. He is usually seen walking or standing in 4 legs. Hourglass starts in the Storage Room and can move to the Staff Area, Meat Freezer, Lounge and Office.

Daisy Duck is Disembodied's girlfriend. She has white feather-like eyelashes and no purple bow, which her Disney counterpart usually wears. Daisy Duck starts in Character Prep 2 before randomly teleporting into the Office. While in the office she will be speed up another Suit. The only way to get rid of her is by shutting off a camera or Shutting off the power.

Willy is a black and white incarnation of Mickey Mouse and looks similar to the Mickey in Steamboat Willy.” He also appears similar to Mortimer Mouse, however, his pants are different and his stomach appears to be larger. His shade version has a space where his eyes are. Willy starts in Character Prep 1, and will move to the Staff Area, Meat Freezer, and then the Office.

The End Of Disney 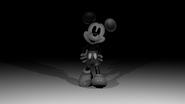 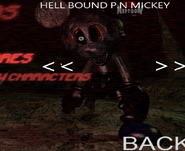 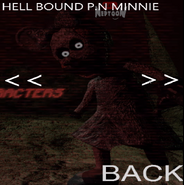 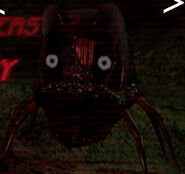 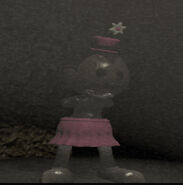